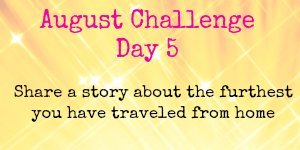 why not join in with us over at the blogging empire society, we would love to have you 🙂

5. Share a story about the furthest you have traveled from home

The furthest I have traveled to the east has been California, USA and to the west Turkey. For those that don’t know, I am in Scotland 🙂 so essentially in the middle, though closer to Turkey than America.

Anyhow, I went to California for 2 weeks in the summer of 1999 with my ex. It was a great holiday, I remember that on the flight over the air stewardess wouldnt let me buy an Jack Daniels h coke as I was only 18 and I needed to be 21 as we were flying to America. O_o I thought that with us flying over international waters that it wouldn’t count, but obviously she thought it did. Plus we were still closer to France than we were America at that point! Hey ho.

Whilst there, we stayed with friends who did Camp America (we were at the camp on or near the naval base in Carlsbad can’t remember what it was called now…and the ex was there the previous year hence why we went there.)

We went shopping in San Diego, visited the San Diego zoo and I go my first taste of the live version of The Rocky Horror Picture Show 🙂 (my fave btw) also on this trip I got my tongue pierced.

I had my first experience if going to a cinema or movie theater in America, as well which definitely an experience for sure. It was scary movie we saw and the entire audience was just hitting calls backs to the screen, and one guy behind us was just wild. You wouldn’t get that here – you would be asked to leave lol Maybe that isn’t the norm, but was an eye opener. 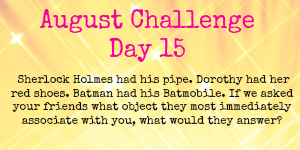 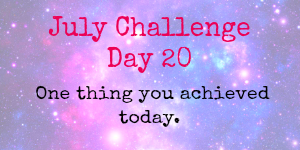 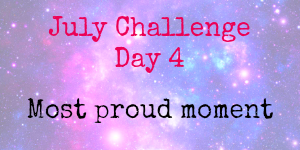